You may have seen the article in the Star Tribune last month about the Shoreview couple who fully funded their Kickstarter campaign for the game, Turing Tumble, in just fourteen hours. It’s an incredible feat – especially considering that their original goal was $48,000 and they ended up raising $404,071. The premise of the game is simple; “players build mechanical computers powered by marbles to solve logic puzzles.” Turing Tumble (named after Alan Turing, the creator of the modern computer) teaches players how computers actually work – not just how to code on an ipad. And it’s really fun – I believe the word “addictive” has been thrown around. And don’t even get me started on the artwork in the puzzle book – so beautiful.

I recently had the privilege of sitting down with the creators, Paul and Alyssa Boswell – and it turns out they’re fans of The Works! It was so fun to see the game in action, and to hear all about their journey from idea to finished product. They have such a great story of persisting through failures and knowing their own strengths – just the message we want to pass on to our aspiring engineers. You can read about the intricacies of the game here. The following are a few excerpts from my conversation with them – hope you enjoy learning about this game as much as I did!

How did you come up with Turing Tumble? 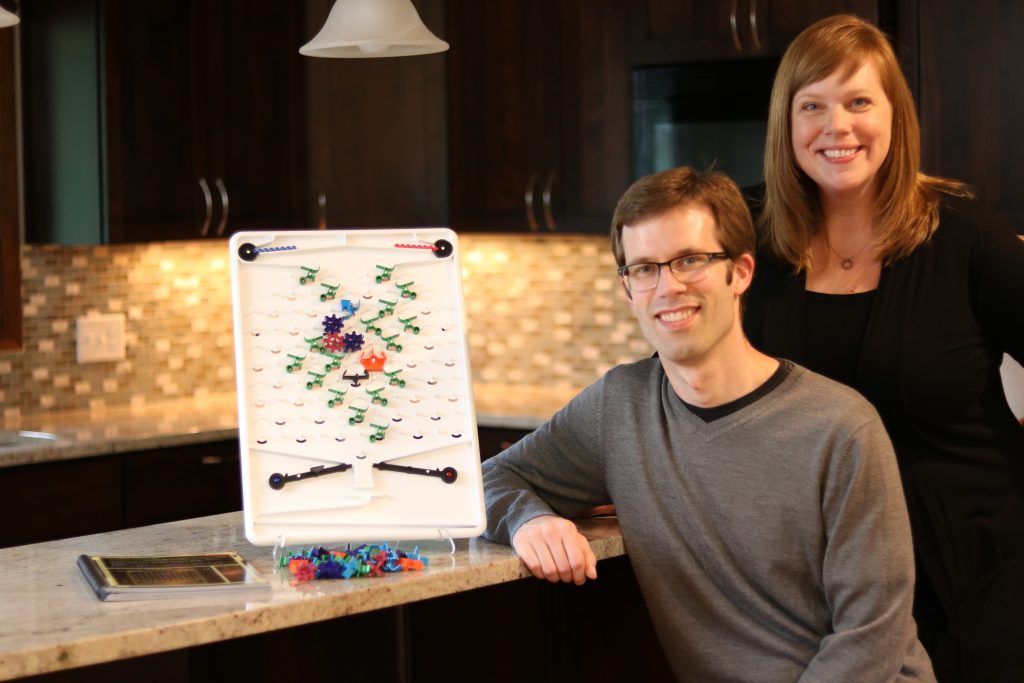 Paul: There are very few games that teach any sort of programming principles without being on a computer or an electronic device. There are board games where you get instructions and the player runs through commands trying to create a program… the problem is, if you have a whole bunch of commands, it’s tedious. The other problem is when our kids play with a game, if they make a mistake, they don’t notice it. They made the program so they figure it’s going to behave a certain way when it’s not.

If you’re going to make any sort of programming game that isn’t on a computer, but allows you to do complicated programming tasks, it has to run the program for you.

That’s when I started looking at mechanical computers and eventually this came out of that. Turing Tumble fills a gap of a non-screen based game that can teach raw coding skills at more than just the basic level.  It also teaches how computers work too, which is unique. There’s nothing I’m aware of like it that’s still sold today.

Alyssa: A lot of classrooms have LEGO Mindstorms and they’re great toys and great learning tools, but a lot of the teachers have trouble guiding the kids to the next level of understanding and comprehension. I feel like this is really going to be something that is useful for parents and teachers because I don’t know how to program, and I can sit down with it and solve these logic puzzles.

I bet the average adult has no idea how this works. 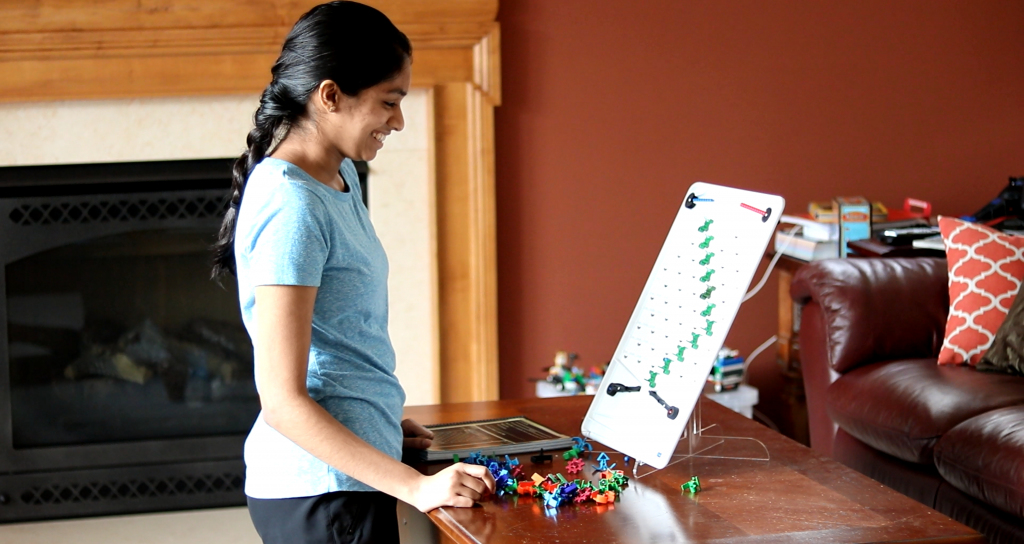 Paul: I didn’t actually know [what was happening inside chips] before doing this. I could hook chips together and make up a computer, but actually knowing what’s going on at that level, I didn’t know. I think most programmers don’t even know.

Do you think that kids are able to make that jump from what’s here in the game to what’s going on in their computer?

Paul: I think it gets them closer. Right now, kids are working with iPads and it’s really magical, but to have some sense of how you can make something… that’s clear how it works, that you can touch and feel, and get that basic level of how you can do logic with tools that you can understand, I think that gets them a long way. With these components, you can do a lot of complex things that you wouldn’t expect you could do with something this simple – there are still some layers in between, but this gets you a lot closer. 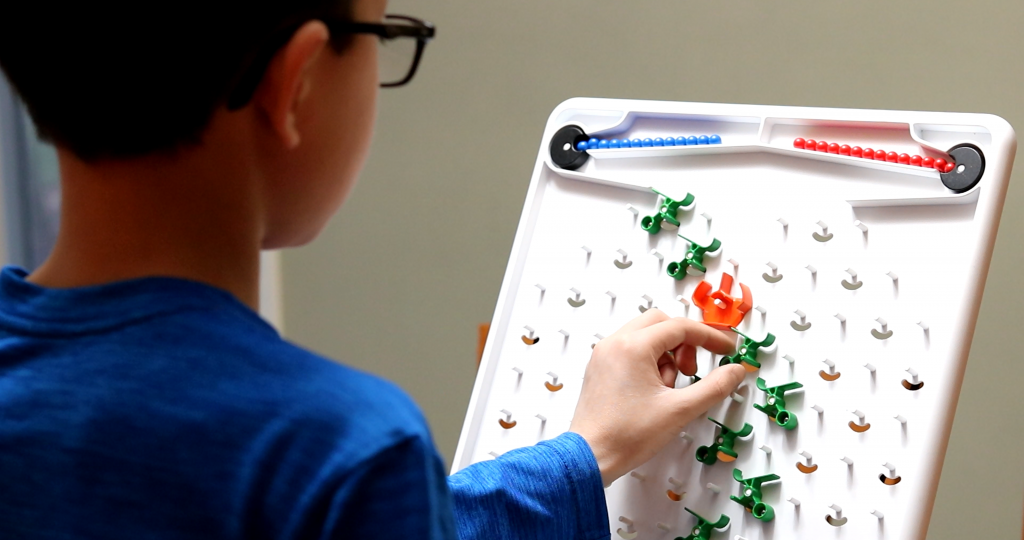 Alyssa: When we were at the Maker Faire we had tons of kids and young people coming up to [the game]. Those who had taken some courses would say “Oh – so that’s binary!” or “So those are the 1s and 0s! That’s what I learned in my class.”

We do so much with the building blocks when kids are doing their math facts and their reading facts, but we don’t have that for computing because it is abstract, and this is what that is. It’s not like [Turing Tumble] is going to make them be able to sit down and program instantly, but it’s going to give them that concrete understanding that’s going to help them go really far.

We teach kids in our workshops about the engineering design process – can you talk about your process for developing the game?

Note: You can read about the different iterations of the game pieces that Paul was working on here. Just scroll way down.

Paul: It started with seeing a need that there wasn’t anything filling, and just trying to figure out how to fill that gap.  It took a while to figure out a solution that was at all viable. I tried a few really simple things and it just wasn’t going to work well – you could tell right away.

When I found the 1960s game Digi-Comp II, I thought “ok now I have an angle on this, this is a way that I could make it.” Then I just started prototyping how you could make a reprogrammable Digi-Comp II and also make it be “Turing complete.”

I also started making 3D printed parts and small things to test if you could actually have the bits flip correctly. Then redesigned them so that they would flip, but not flip and bounce back the other way, etc. It was a lot of iterations, and then I ended up with a bigger version of this that was all 3D printed. It didn’t look very pretty but it worked, and after I got that all working, I switched to this version [the one on the Kickstarter].

Obviously, this Kickstarter campaign has created a lot of news. How did you get funded so quickly?

Paul:  We did a lot of work before hand to get a core group of people together, so Alyssa created a Facebook page for it and we did some giveaways beforehand to get people liking the page. We sent emails to a whole bunch of reporters. We made videos and released them as we went leading up to the Kickstarter.

We didn’t do anything that anybody else couldn’t do though, that was the one thing that kind of surprised me… We talked to people who said “you’re gonna need a whole year to get this going, it’s just not gonna work” because other people who have had successful Kickstarters have had deep ties in the tech industry.

Alyssa: People said that it won’t go big because we don’t have this big machine behind it making it go viral. The only social media that I know well is Facebook. I tried to get on Twitter, I tried to get on Pinterest, I tried to get on Instagram, and I failed at all three. We just did Facebook well… It wasn’t anything fancy though, it was just us.

Can you talk about the book and the artwork?

[Turing Tumble comes with an instruction book filled with 51 puzzles. The puzzles are woven into a 20-page illustrated comic that tells the story of Alia the space engineer on a seemingly deserted planet.] Paul: When I was at the University of Minnesota I worked with a student named Jiaoyang. She was in my lab and one day she was doing some chemistry research and showed me her laptop that had this wallpaper that she had drawn. I asked her to bring more of her artwork in and it was amazing.

She had no training at all –  she does now, she’s an Art and Computer Science major – but at the time she didn’t. It’s really remarkable, she did a really good job. When this project came about I asked her if she’d be willing to make a comic book that goes with it. She’s been working at it for a long time and it’s really close to done. 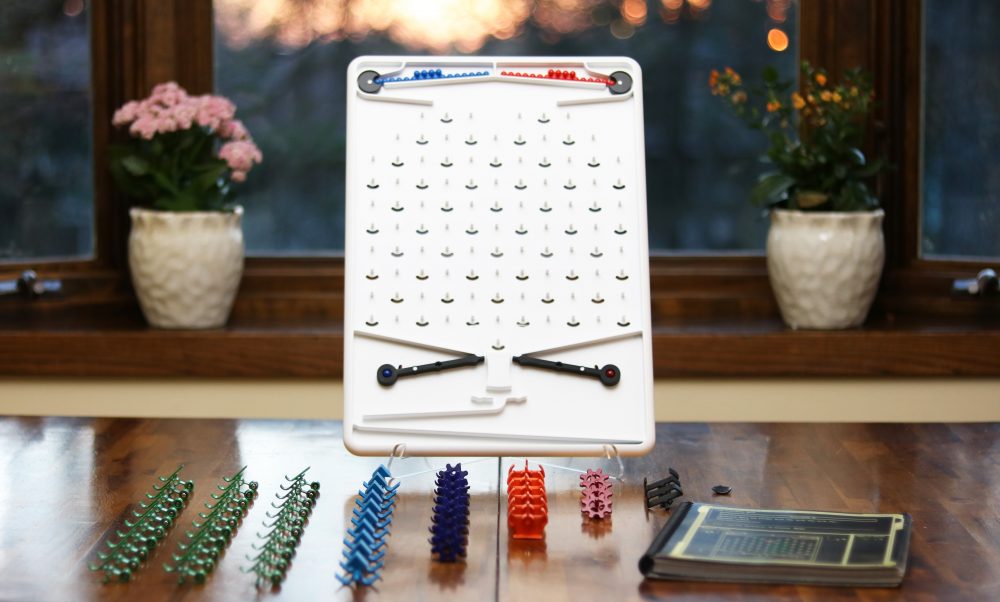 If you know The Works Museum, you know we’re all about connecting kids with hands-on engineering – so this game was right up our alley! We are so impressed with what Paul and Alyssa are doing with Turing Tumble. A giant high five to them for coming out here and telling us their story! You can follow their progress, and preorder a copy of Turing Tumble here. Make sure you’re following us on Facebook, Twitter, and Instagram so you hear about our latest blogs, interviews, and Pop-Up Engineering events!

About the Author: Kara Newby