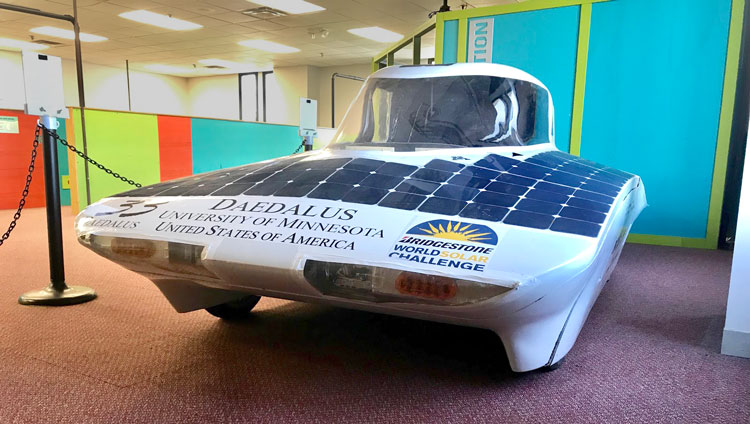 The Works Museum is happy to welcome a new exhibit to the experience floor: Daedalus, a solar race car. The solar powered race car was built by the University of Minnesota Solar Vehicle Project student group in 2013. Its Museum debut occurred at Tech Fest, our annual celebration of engineering, this spring.

Three of the project’s group members were active at Tech Fest, discussing their roles in the Solar Vehicle Project. One fourth year student, Erick Sipila (who goes by Rickey) is the Director of Operations for The Solar Vehicle Project at the University of Minnesota. He joined the student group two years ago when a friend convinced him to come along to a meeting. The group is a welcoming environment to all paths of study. “You don’t have to be an engineer, you can be a business student, graphic design major, [and] there are political science majors on the team,” he explained. Sipila is an industrial and systems engineering major. “I chose industrial systems engineering because I was tied between business and engineering‒and industrial systems is a little mix of each,” he said. Sipila manifests his combined interests by playing his leadership role on the team. He says he enjoys the student mentorship and hands-on opportunities fostered by the project.

Meet the creators in this video interview.

All of the solar vehicles have names decided on by the team, and the new guest at the Museum is a 2013 model named Daedalus. Daedalus is unique in the solar vehicle world,  because it has two seats. It’s called a Cruiser Class Vehicle – one of the first of its kind. “We want to make these cars come closer to the consumer market, we want to make them practical, [and] consumer friendly,” Sipila explains. The University of Minnesota’s team was the first American team to enter in the Cruiser Class challenge at the World Solar Challenge in Australia.

Daedalus competed in 2013 as the University of Minnesota’s first Cruiser Class competitor and won 4th place in the Bridgestone Solar Challenge in Australia. The University has participated in the competition for the past eight years, with four different vehicles. Daedalus has the means to reach up to 83 miles per hour, the team members say. Besides looking different from a typical car in shape, the vehicle is also very quiet.

“…so (if) you can imagine a solar car track race, compare it to like NASCAR where it’s really loud – there are like 20 cars just going in a circle but you hear nothing!” Sipila describes.

The competition in Australia unites teams from all over the globe. It isn’t considered a solar race as it is a comprehensive challenge, Sipila says. Teams gain and lose points depending upon the distance, speed, battery size and occupancy of the vehicle on the track.

Daedalus is now ready to find a home at The Works Museum on display. The vehicle represents renewable energy and attests that engineering challenges are best tackled with a team.

“I look at The Works Museum right now and this is a paradise. We’re really happy to have Daedalus here to to inspire the next generation of engineers.”  Sipila adds. 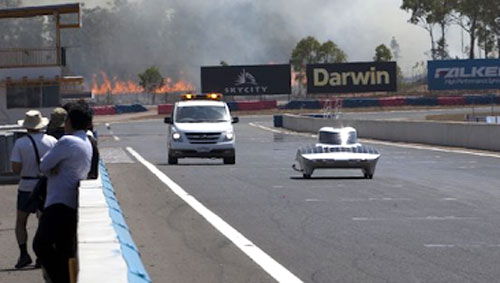 To see Daedalus on display, visit The Works Museum. For more information on the UMN Solar Vehicle Project visit their site: https://umnsvp.org

About the Author: Ali Larson